As she grew older, Betsy Ross took in many family members and offered them a home, including nieces, Betsy’s widowed daughter Clarissa, and Clarissa’s five children. With Clarissa’s help, Betsy continued to work as an upholsterer and flag-maker until she retired at the age of seventy-six and went to live with her daughter Susanna outside Philadelphia. Despite losing her vision, Betsy made the weekly carriage ride into Philadelphia to attend services at the Free Quaker Meeting House. Three years before her death, Betsy was completely blind. She spent the last years of her life with her daughter Jane in Philadelphia.
Posted by Paula Gail Benson at 1:30 AM No comments:

Betsy Ross had three husbands. With John Ross, she opened an upholstery business. Following John’s death, she married, Joseph Ashburn, a seamen whose vessel, The Lion, was captured. After being charged with treason, he died in the Old Mill Prison in Plymouth, England. He and Betsy had two daughters, only one of whom lived to be an adult. A fellow prisoner, John Claypoole, brought Betsy the news of Joseph’s death. John and Betsy married and became members of the Society of Free Quakers, which supported the colonists’ fight against Great Britain. The Claypooles had five daughters, one dying while young.
Posted by Paula Gail Benson at 1:30 AM No comments:

A Woman of Mystery

While people know George Washington asked Betsy Ross to sew the first U.S. flag, few are aware of her personal history. Born into a Quaker family, the eighth of seventeen children, Betsy moved to Philadelphia at age three. Following her formal education, she apprenticed to an upholsterer, where she met her first husband, a fellow apprentice and Anglican. Because her family did not approve, they eloped. He died two years later. In 1774, Betsy made bed hangings for George Washington. Finding her both trustworthy and skilled, Washington commissioned her, a childless widow of twenty-four, to make a flag he designed.

A biography of Betsy Ross, written by National Women’s History Museum Fellow (2018-2019) Kerri Lee, contains the account of William Canby, Betsy’s grandson, explaining to the Historical Society of Pennsylvania why the United States flag has five-pointed instead of six-pointed stars. When George Washington, Robert Morris, and George Ross approached Betsy about stitching the flag, their design featured thirteen red and white stripes and thirteen six-pointed stars. Betsy convinced them to agree to five-pointed stars by folding a paper into triangles and creating a five-point star with a snip of her scissors. Betsy then made the first United States flag.


George and Martha Washington were married on January 6, 1769, at White House, the estate Martha had inherited from her first husband, Daniel Parke Custis. Many festivities took place during this time of year. Likely, Martha prepared for numerous guests and stocked for them to stay an indefinite time period. Daniel, twenty years older than Martha, had been her husband for eight years before his death, probably from a heart attack. Eighteen months later, she married George, who was almost a year younger. A beautiful widow, aged twenty-six, with two children and an impressive inheritance, Martha made quite a catch.
Posted by Paula Gail Benson at 1:30 AM No comments: 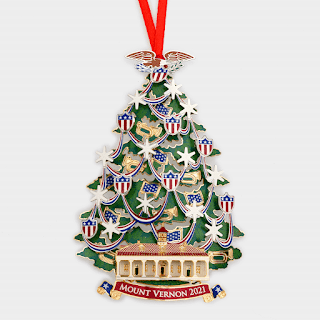 The 2021 Mt. Vernon Christmas ornament features the six pointed star found on Washington’s Commander in Chief Standard or Headquarters Flag. The original silk flag, on display at the Museum of the American Revolution in Philadelphia, is faded from a much darker blue and one of the earliest flags containing thirteen stars symbolizing the thirteen colonies. It indicated Washington’s position on the battlefield or his tent in an encampment. Interestingly, the ornament has twelve instead of thirteen stars. I wonder if they represent the twelve days of Christmas (since George and Martha Washington married on Twelfth Night or January 6)? 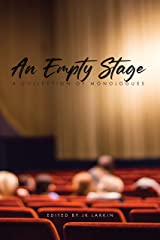 “The Fairy Godmother’s Christmas” in Once Upon a Time and Stand Out: Volume Two; and 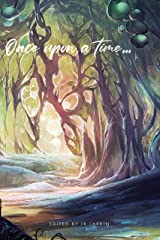 “No Legs” accepted for The Robot and Me. 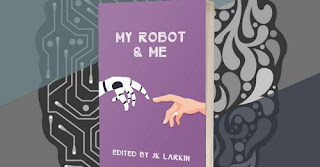