If you want to take a vicarious vacation to the South Carolina coast, try Susan M. Boyer's Liz Talbot mysteries that take place on the fictional Stella Maris island, near the Isle of Palms.

The second, Lowcountry Bombshell, was released in September 2013. Boyer's love of family, beach, humor, and the South makes these delightful reads.
Posted by Paula Gail Benson at 12:00 AM No comments:

Sunday, July 20, at 2:30 pm, a family friendly concert to benefit Children's Chance will be held at Bill's Pickin' Parlor and Music Shop in West Columbia. Children's Chance is a South Carolina organization that assists children and families dealing with pediatric cancer, helping them to remain intact and functional as they face crisis. Next year, the proceeds from an anthology compiled by SCScreams and published by Joggling Board Press will benefit the charity. My story, "Just Not Fated," is included. I hope to see Fran Rizer, who writes the Callie Parrish mysteries, and other anthology contributors at the event. 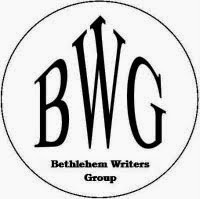 Georgia Ruth's and my writing paths continue to cross. After meeting at the High Country Festival of the Book, our stories now appear in the July/August issue of the Bethlehem Writers Roundtable. The two competitions where our submissions were accepted have each sent out a new call. The Bethlehem Writers Roundtable seeks food stories of up to 2,500 words for its 2015 Short Story Award, opening on October 1, 2014.

Buddhapuss Ink announced it will accept 3,000 to 7,000 word submissions for the Mystery Times 2014 competition beginning July 15th to October 31, 2014. See my guest blog at: http://buddhapussink.blogspot.com/2014/07/the-writers-competitive-edge-or-how.html.

Georgia Ruth and I met as members of StorySuccess, the online critique group sponsored by the Guppy Chapter of Sisters in Crime. By email, we communicated about stories and other matters, but did not meet in person until I attended the High Country Festival of the Book in Boone, NC. We took a picture with each of us holding a copy of Mystery Times Ten 2013, the anthology that published Georgia’s “Dear Courtney” and my “Confidence in the Family.” In the July/August issue of the Bethlehem Writers Roundtable, our stories appear together again. Please check them out at: https://sites.google.com/site/bethlehemwritersroundtable/apple-s-lure
https://sites.google.com/site/bethlehemwritersroundtable/pickin-banjo

High Country Festival of the Book


I attended the 3rd Annual High Country Festival of the Book, sponsored by the Watauga County Public Library, Boone, N.C. It offered an eclectic gathering of authors/musicians/exhibitors, presented in panels at the Jones House and under tents outside and indoors in the Library’s conference room. Susan F. Craft, Bert Goolsby, and I enjoyed a table inside. I watched the “Mystery They Wrote” panel moderated by Kaye Wilkinson Barley, featuring Vicki Lane, Sean Keefer, and Mike Orenduff. In Boone, we toured the Appalachian State University campus and ate at the Daniel Boone Inn Restaurant and Red Onion. See also: