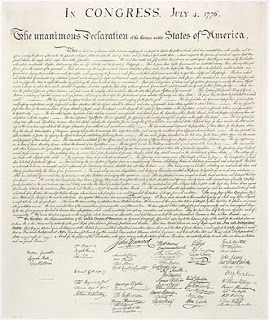 The Second Continental Congress voted for independence July 2, 1776, before adopting the Declaration on July 4. (Formerly March 5, date of the Boston Massacre, was the major patriotic holiday.) In a letter to his wife Abigail, John Adams wrote:
“. . . it will be celebrated by succeeding generations as the great anniversary festival. It ought to be commemorated as the day of deliverance by solemn acts of devotion to God Almighty . . . [and] solemnized with pomp and parade, with shows, games, sports, guns, bells, bonfires and illuminations from one end of this continent to the other, from this time forward forever more.”